Please note: I first wrote this post back in October 2019, a lot of things have happened since then, not least the release of the PS5 and Xbox Series X. Check Brook’s website for updates about new console compatibility.

Everyone loves a fightstick, don’t they? Well, almost everyone - probably. The problem with them tends to be that they are rather expensive and more often than not they only work on one platform. Quite unsurprisingly these were the exact issues I had with my Mad Catz Street Fighter IV Round 2 TE FightStick. It was both rather expensive and it only worked on my PS3 (with special thanks to Sony for deliberately breaking PS3 peripherals on PS4). Thankfully it’s now possible to do something about that.

Until relatively recently the only solution was throwing away a lot of money to buy multiple fightsticks. I don’t know about you, but when you’re looking at well over £100 a time, that’s not really a viable option for most people. However, these days there are other options - many options - ranging from plug and play adapters to full PCB replacements. The adapters seem like a reasonable option, though they tend to be console specific (i.e. you would usually need one adapter for PS4, one for Xbox One, one for Nintendo Switch etc.), so the cost soon adds up, and then there’s the dreaded ‘lag’ issue to consider. The PCB replacements on the other hand enable you to use your stick on a multitude of different platforms, but tend to need an awful lot of work, including a not insignificant amount of soldering.

Most people don’t want to have to learn to solder just to fiddle around with their fightstick. While I’m no stranger to soldering myself, even I would rather not go poking around a plastic fightstick body with a hot soldering iron. One slip of the hand and the iron would melt through it like a knife through butter. Now, thanks to Brook and Jasen’s Customs/EZ MOD (alas, since originally writing this Jasen shut up shop - in June 2020), you don’t have to be able to solder to get your stick working cross-platform. Yay!

The Jasen’s Customs Mad Catz TE/SFxT/VS/FS Pro EZ MOD, combined with a Brook UNIVERSAL FIGHTING BOARD, provides a solder free solution for a range of Mad Catz fightsticks: including my Mad Catz Street Fighter IV Round 2 TE for PS3. Perfect, and it works a treat! However, I did have some issues figuring out what to do. The instructions provided aren’t the best, the written instructions lack detail and the video - while much more detailed - runs over three hours and wonders off on a number of tangents. So I decided to document the process to help others confronting the same issues.

To convert your stick you will need the following:

The first step is to open up the fightstick. In the video Jasen removes all the screws from the bottom plate, this isn’t actually necessary, you just need to remove the six smaller screws (marked in red below). One of which is covered by a “Warranty Void if removed” sticker. That’s not really a worry these days, since even if the stick were still in warranty Mad Catz filed for bankruptcy back in 2017. 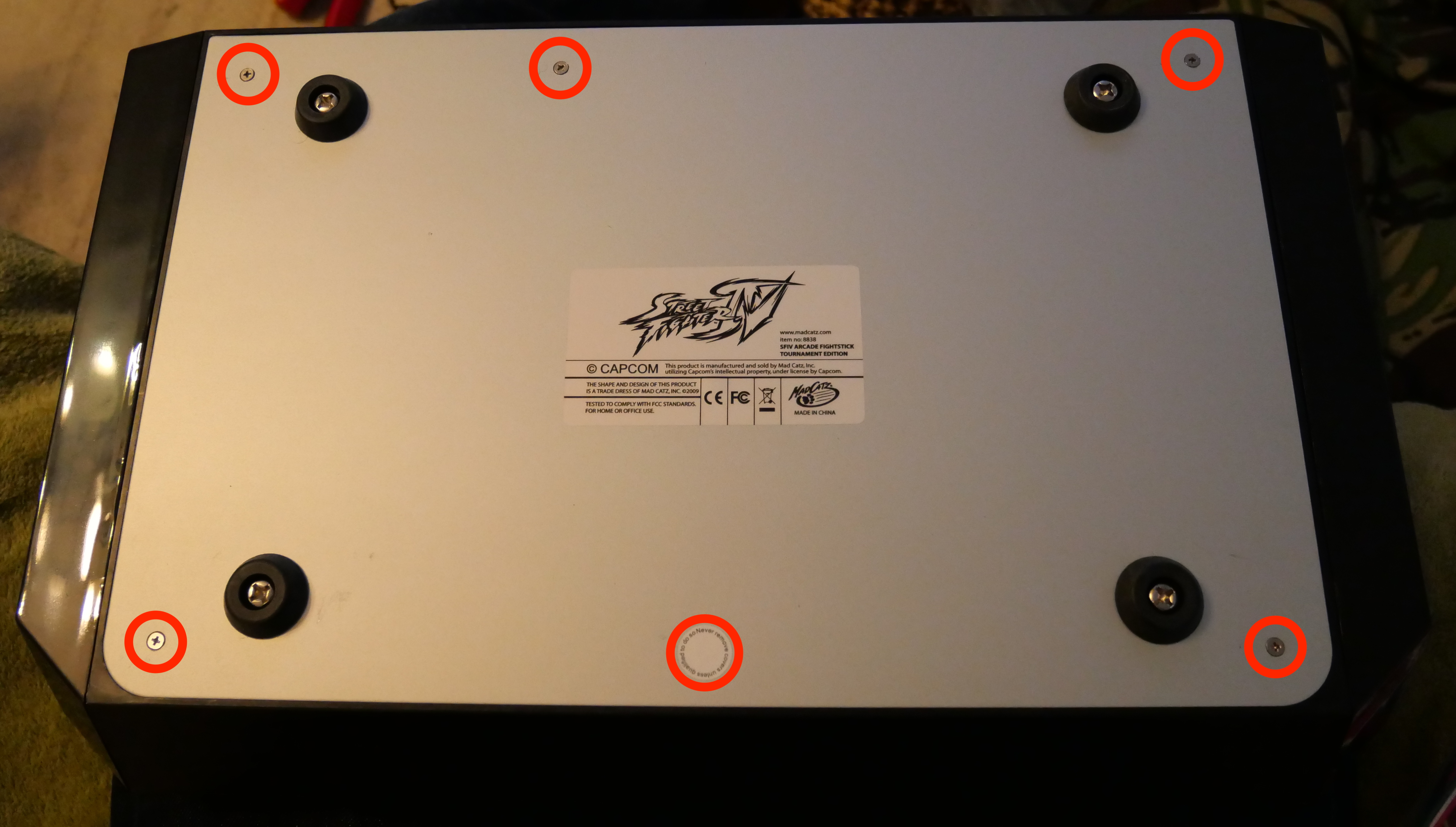 You’ll also need to remove the six screws from the top plate (again marked in red below). 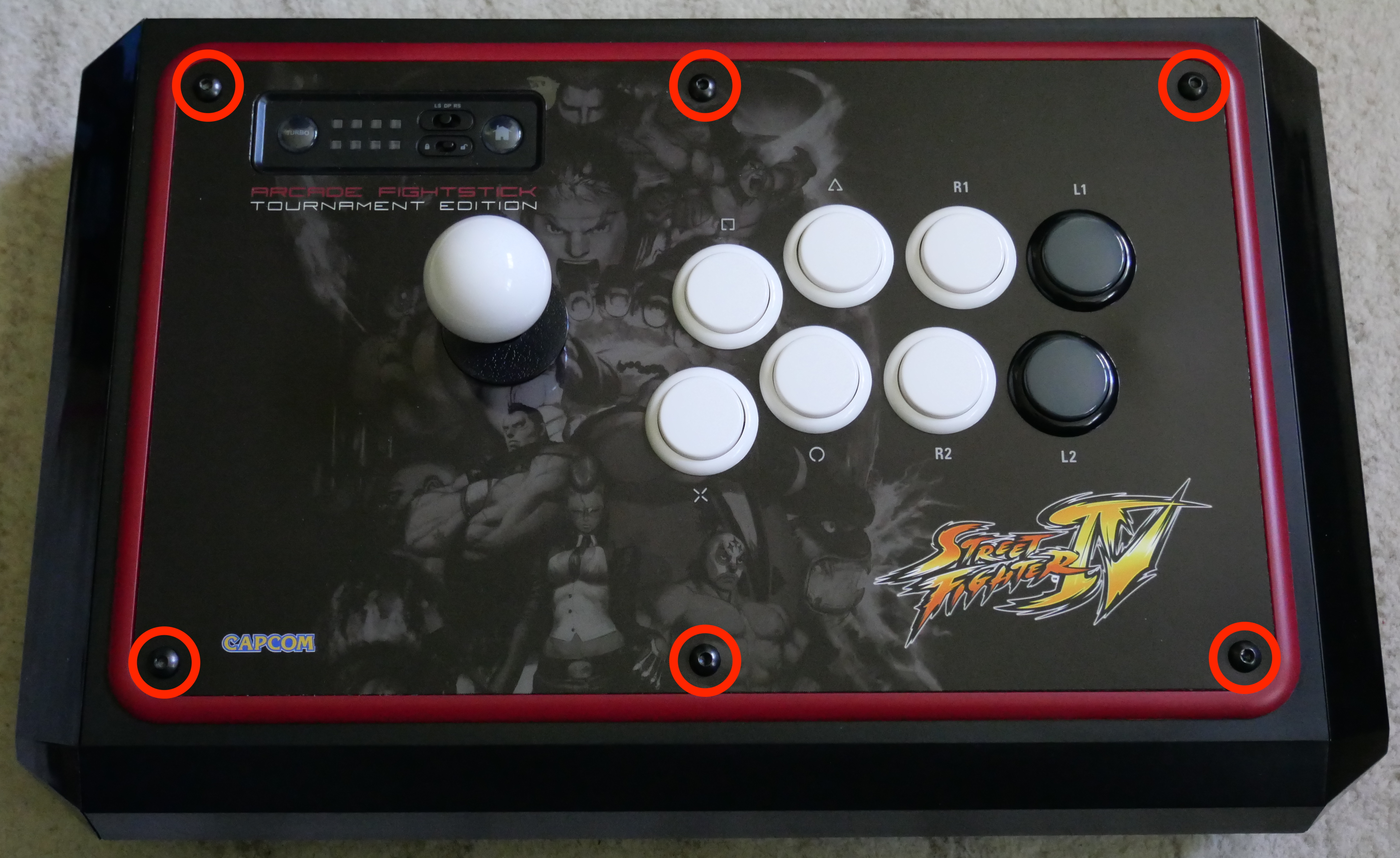 At this point you begin to pretty much disassemble the fightstick, first remove the top and bottom plates so you can access the insides. To do this you need to unplug all the buttons and the joystick from the top plate, all of them. But before you do mark which colour wires go to which buttons, or better still take a photo. All the connector’s are push fit, so should just pull off. My button connectors were little tight, so I had to gently prise some of them off with pliers. Be careful though, you don’t want to break the connectors. 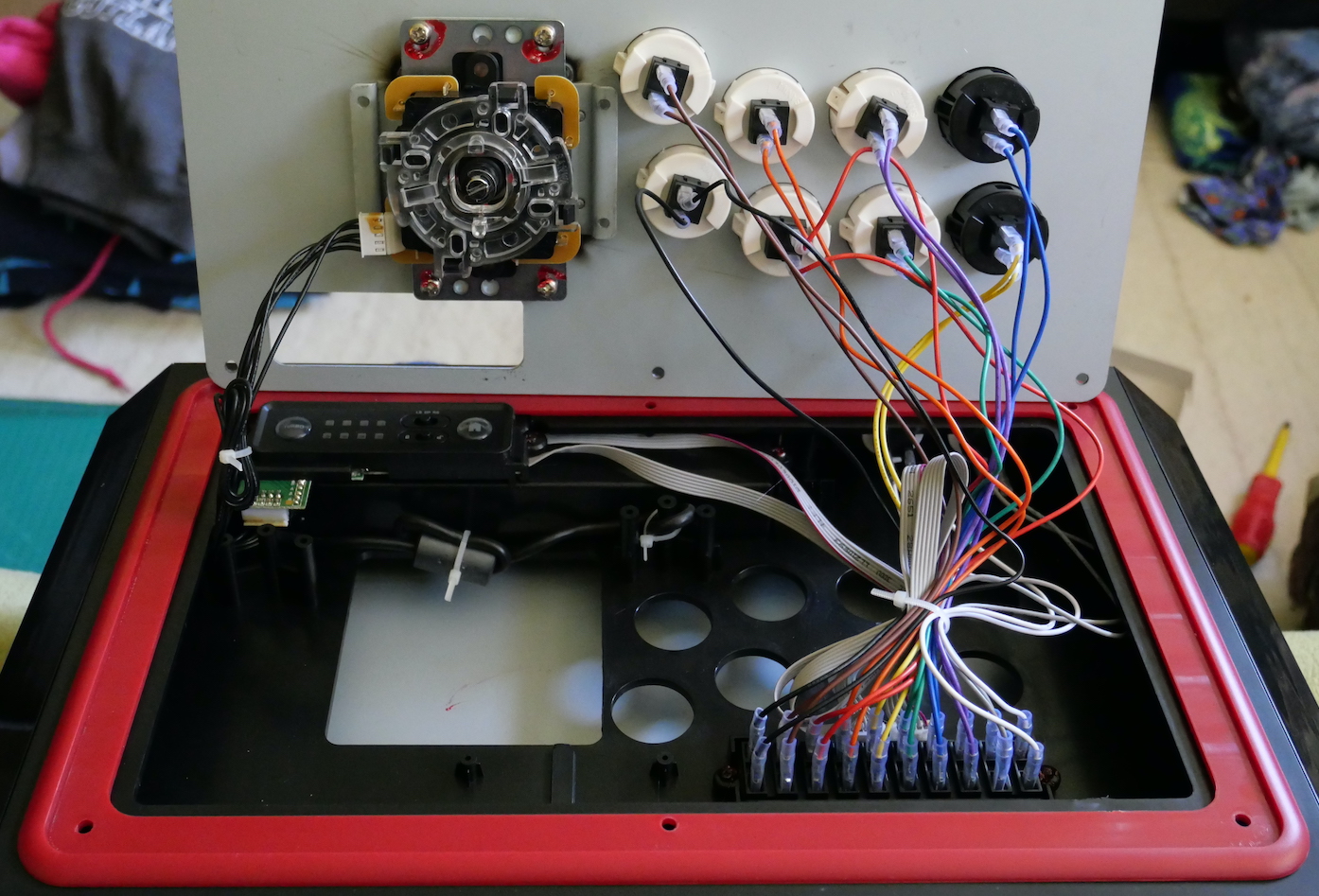 Next you remove the stock PCB from under the home area, to do this first undo the two little screws holding down the home area on either side (marked in red below). Beware the reddish goop covering the screws, you may need a knife to scrape it off.

The original PCB is clipped into the home area with some plastic tabs and there are some wires you’ll need to snip. Yup, we’re onto the nerve wracking part. The old PCB is being replaced, so you don’t need to worry too much about this part. Unless you intend to return the stick to stock at some point in the future, in which case you should try to keep it neat. Unplug the socket in the top left of the photo below, then cut all the remaining wires, all of them. The places to snip are marked in red below. Cut as close to the board as possible, because you’ll need to reuse those wires and any extra length you can eke out at this point will make things easier on yourself later. Also remove the glue from the wires as best you can.

Now it’s time to turn your attention to the EZ MOD board, which needs preparing. Do this by cutting the appropriate jumper (SJ2 or SJ3, marked in the red circle below) with an sharp knife. Gently scrape away the link in the middle of the jumper with the tip of your knife. Which track you need to cut will depend on which stick you have (check the EZ MOD instructions), I had to scrape SJ2 for the Round 2 TE FightStick. 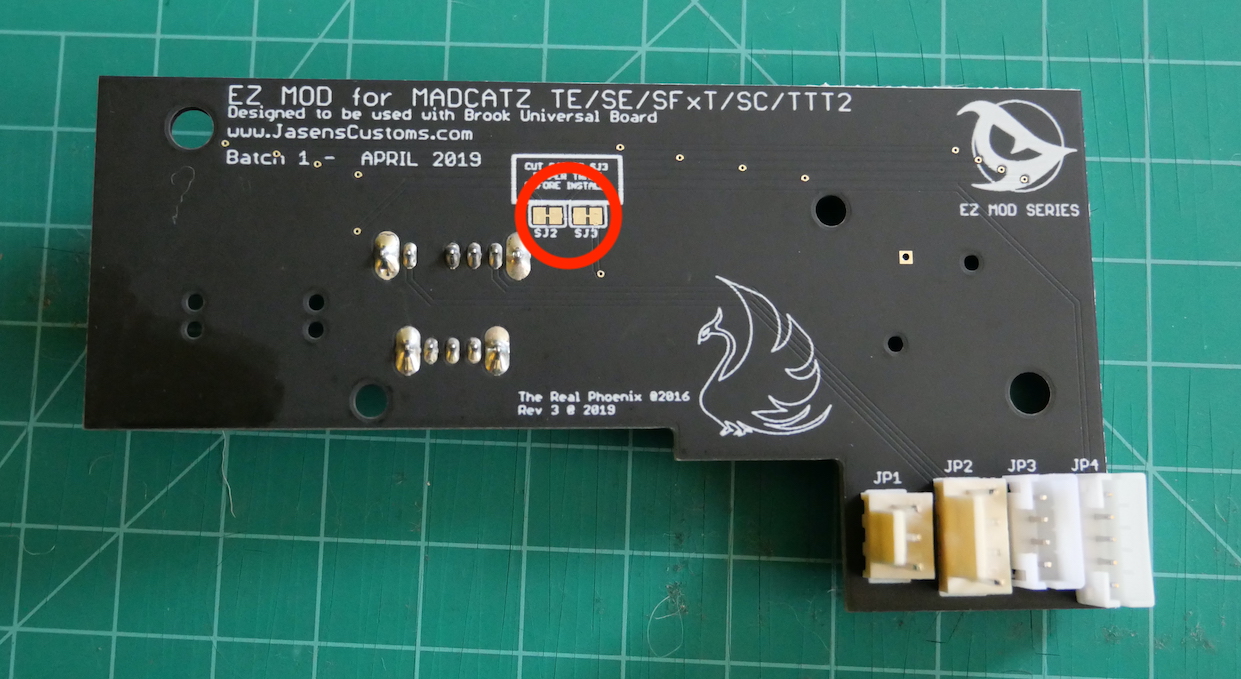 Flip over the EZ MOD and take a look at the two switches on the front, this is where the switch covers from your home area need to sit. However, the switches on the EZ MOD might be too long and need to be trimmed a little. For my Round 2 TE FightStick the LOCK switch needed to be cut by around 2mm. If you’re unsure check the lengths of the switches on your original PCB.

Now transplant the dome switch covers from your home area, carefully, to the EZ MOD. Then reinstall the EZ MOD into the stock home area housing, it should just clip into place. At this point you will need to decide if you want a TURBO button or a TP CLICK button (I went for TP CLICK, for use on my PS4) and connect the appropriate lead to the EZ MOD, as per the EZ MOD instructions.

Then, it’s time to begin putting the stick back together. Bear in mind while doing so that you’ll need to leave space for the final placement of the universal fighting board and the small USB adapter PCB. Trim the ends from the stock USB cable, leaving a little bare wire at the end to screw into the terminals on the USB adapter PCB. The USB wires will be colour coded, and the terminals are marked. So, finding which wire goes where will be pretty straight forward.

Next, strip the ends of the grey ribbon cables for the buttons and the joystick and connect them to the appropriate screw terminals on the universal fighting board. My wire strippers weren’t up to the task here, as the wires are so thin, so I had to do it by hand with a sharp knife. Be careful not to cut the wires, if you’re gentle and take your time you should be able to feel the right point to stop cutting. You’ll need to screw these into the terminals on the universal fighting board, they’re all marked on the board so that’s the easy part. The tricky part is tracing the ribbon cables back to match them up to the individual buttons. I used a pen to mark one side of the ribbon and traced that end first, before working my way down the ribbon.

The next step is one of the easier ones, connect the wiring from the EZ MOD to the universal fighting board. It’s all plugs and they’re all different sizes, so you can’t go wrong. If in doubt check the photo below and the EZ MOD instructions.

Now you can fix the universal fighting board and the USB Adapter to the bottom panel of the fightstick, using some sticky PCB feet. I tucked mine along the bottom edge, different sticks may have different locations that work. You might also want to grab some cable ties to keep the wires neat. 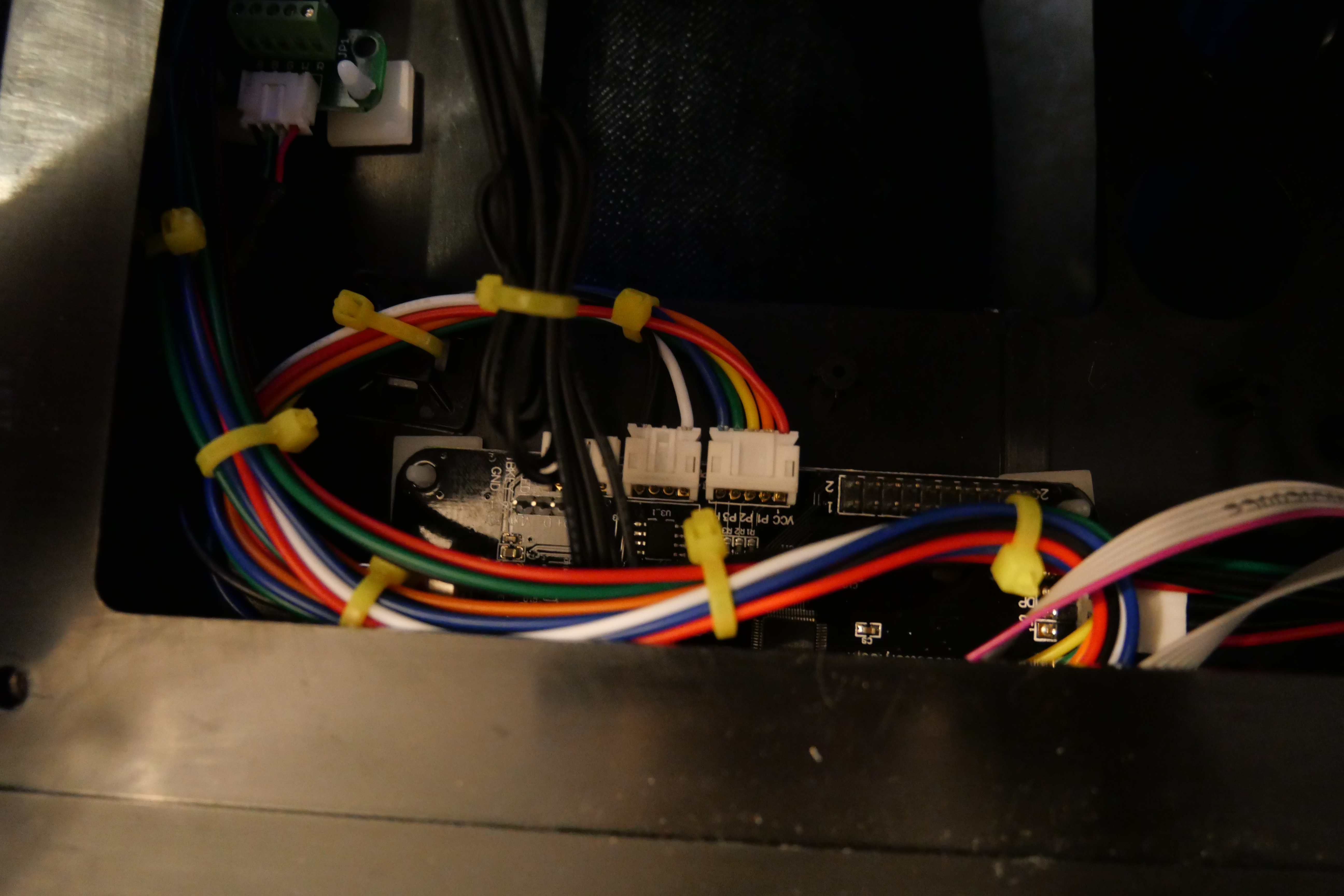 That’s almost it, the final step is reconnecting the buttons and the joystick to the stock wiring (you did make a note of what went where, right?) and reinstalling the panels. 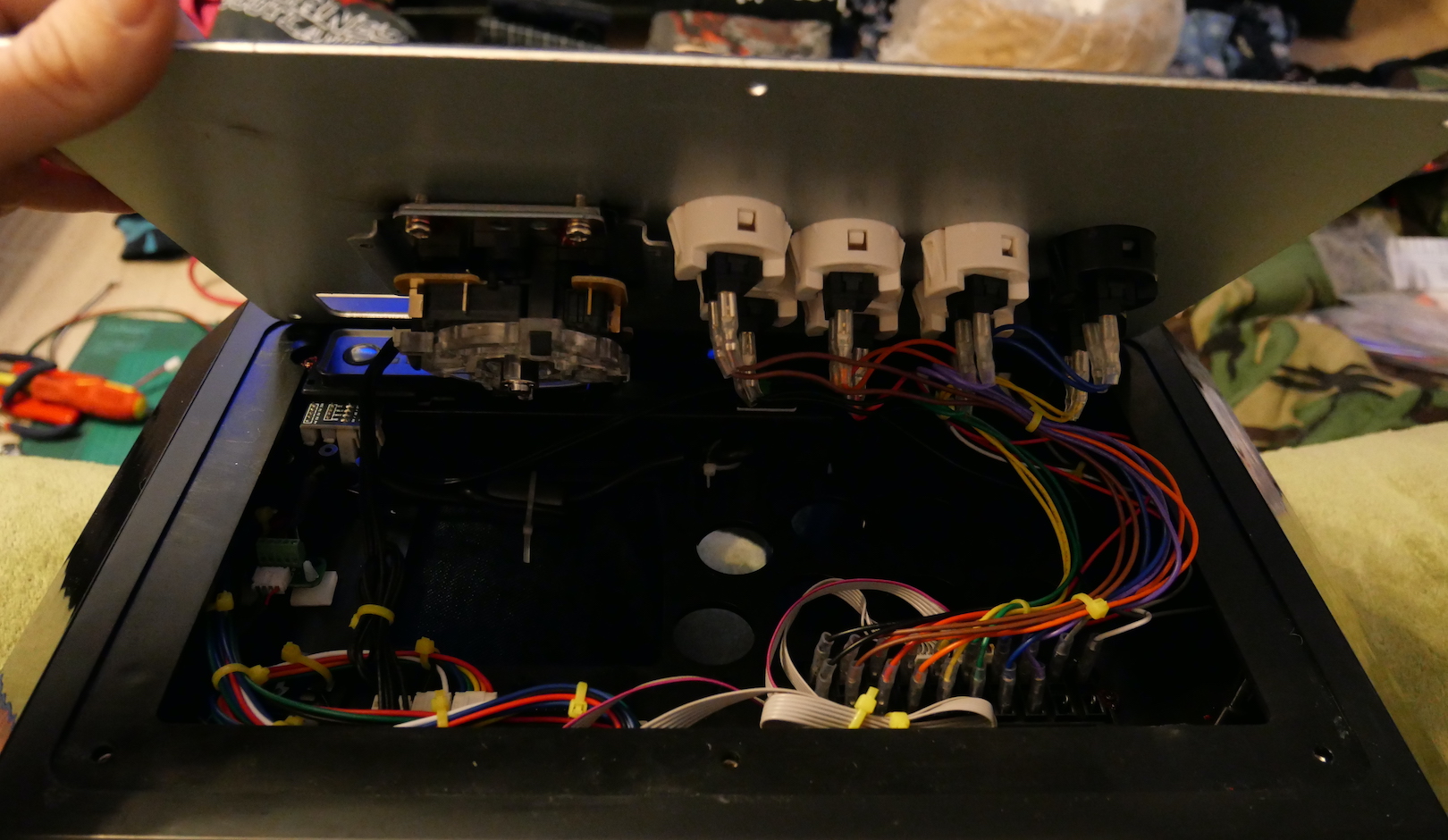 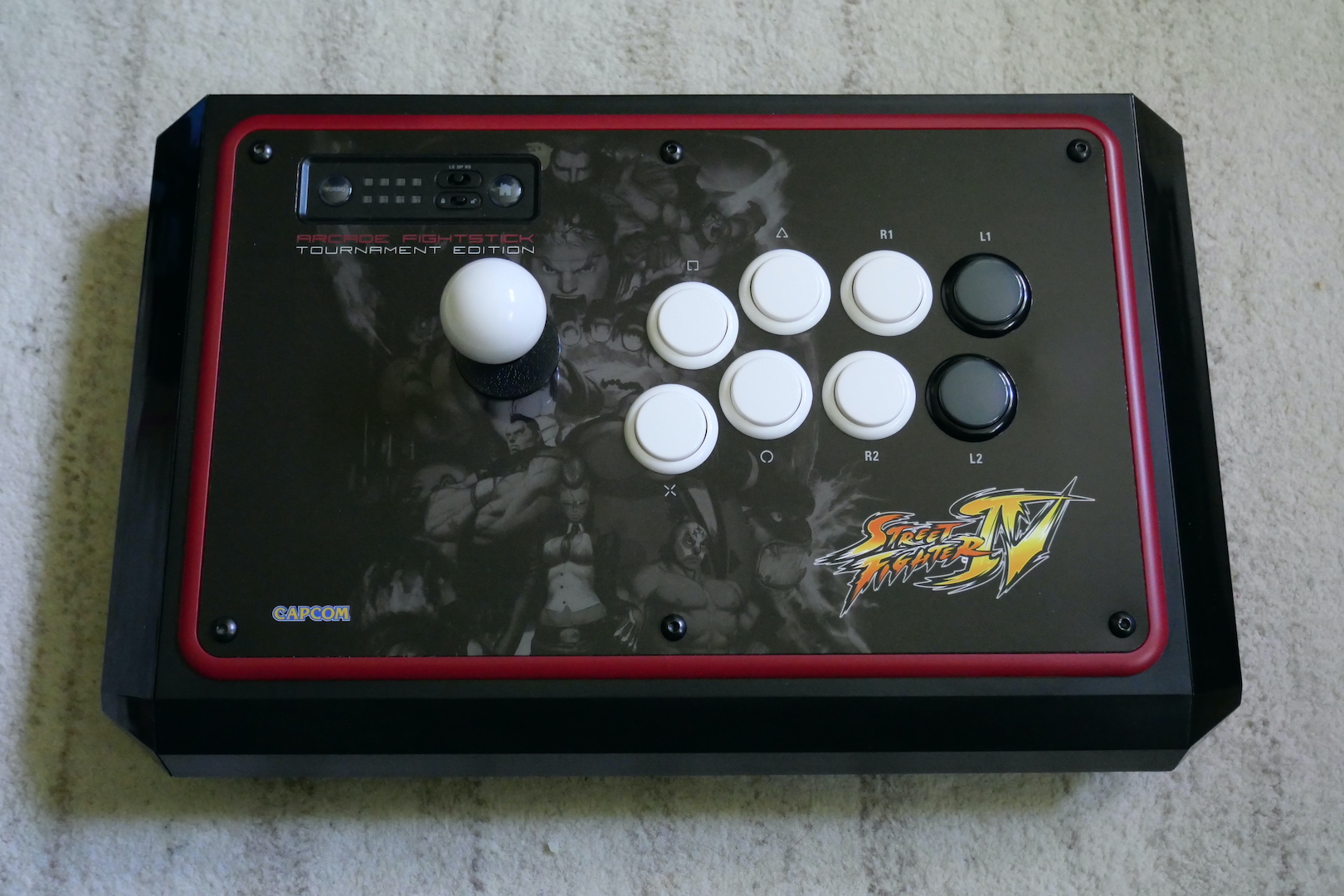 Trying to get Jekyll running on macOS Catalina but hitting a brick wall and the Jekyll documentation isn’t helping?...

This is coming a little later than I’d planned (life and a poorly cat got in the way), but...