My first full article’s up and you can read it here. The banner outside advertising the exhibition

Any fan of Neon Genesis Evangelion may already be aware of just how easy it is to immerse yourself into the world of Eva during a trip to Japan. To nicely illustrate this, on my recent visit to Japan, I was fortunate enough to stumble across the Evangelion and Japanese Swords Exhibition which was being showcased at the Osaka Museum of History from 3rd July to 16th September 2013. I spotted a poster one day while passing through Shin Osaka station and decided to head over and take a look. It turned out to be well worth the train ride and subsequent short walk. Compared to other comparable Japanese events and exhibitions entry was a pretty reasonable ¥800 for adults, which is about £5.

The exhibition clearly forms part of the of the extensive promotional activities supporting the release of Evangelion: 3.0 You Can (Not) Redo, with the Evangelion Store taking up another room almost as large as the exhibition itself. The film itself came out in Japanese cinemas last year and on DVD and Blu-ray in Japan earlier this year; it will hit these shores in October courtesy of Scotland Loves Anime and Sci-Fi London, then in November at Leeds International Film Festival. However, perhaps surprisingly, the other purpose of the exhibition is to promote the Japanese sword industry. A clear hint towards this can be traced back to the exhibition’s original location at the Bizen Osafune Japanese Sword Museum in Okayama. The exhibition has been touring Japan for around a year now and carries with it the hopes and aspirations of the Japanese sword industry.

Further investigation into the origins of the exhibition indicates that modern Japanese swords are simply not selling in the current climate, and when they do sell it is for a fraction of the value they once achieved. It is estimated that there are only around 300 modern swordsmiths currently plying their trade in Japan; using traditional techniques they are producing a little over 1000 swords each year between them. The hope is that by showcasing the beauty of such wonderfully crafted swords alongside the artwork and weapons from the popular Evangelion franchise, a whole new audience will be introduced to the wonder of Japanese swords.

The exhibition aims to teach you a little about the art of modern Japanese sword-making. There are showcases full of real life versions of weapons from the Rebuild of Evangelion films, as well as designs inspired by them. The centre piece of the exhibition is, of course, the 3.3 meter long, 22 kilogram recreation of the Lance of Longinus - all crafted by highly skilled Japanese swordsmiths.

The exhibition provided a floor plan in English, as well as English descriptions of the different sword types and a description of the sword making process.

Now, without further ado, let’s get onto the bit you’ve been waiting for: the photos of the exhibition itself. 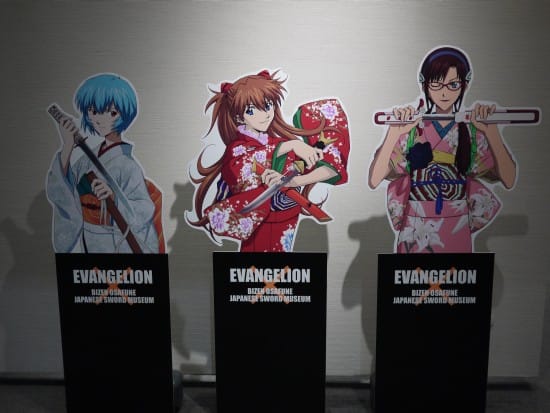 As you walk into the exhibition you are greeted by Rei, Asuka and Mari, each carrying their “inspired by Evangelion” blades and wearing rather fetching kimono. Once inside you find a plugsuit clad Rei and Asuka posing for that all-important photo opportunity. The first thing you see in the exhibition is a large display of traditional Japanese swords. 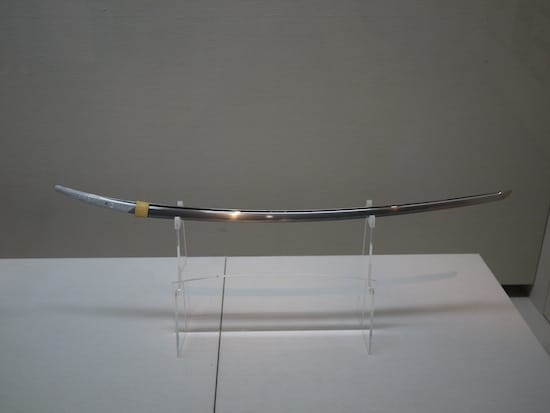 Here’s a closer shot of one of those traditional swords, you’ll find some more in the gallery at the bottom of the page. You even have the opportunity to try picking up a sword, which is surprisingly heavy. The blade is kept behind a perspex case, for obvious safety reasons.

Next we’re onto the Rebuild of Evangelion replica blades: 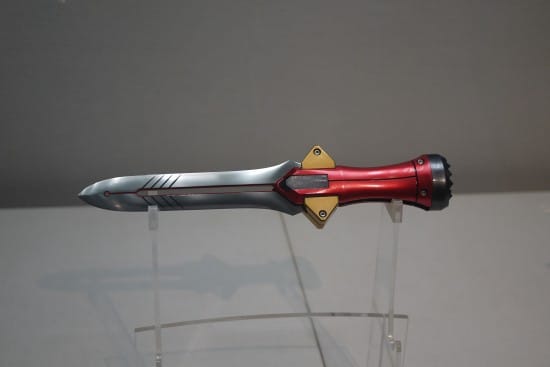 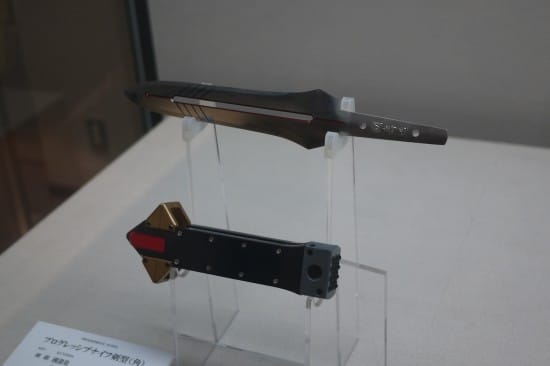 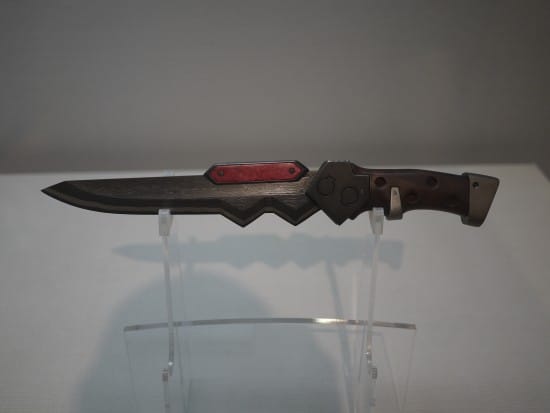 Here are the blades inspired by the Evangelion characters, one of my favourite parts of the whole exhibition. 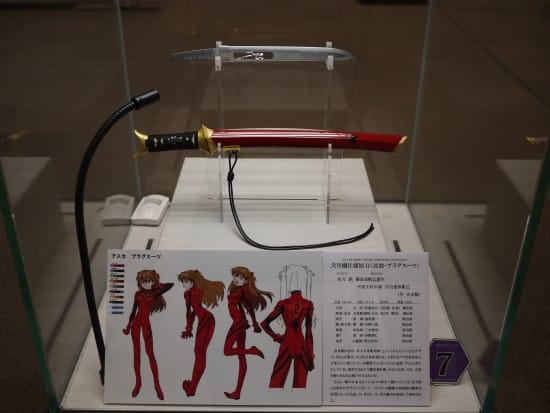 Asuka’s Blade, titled “EVA PRODUCTION MODEL 02 Tanto (Shikinami Plugsuit)”, is my favourite. Brightly coloured in the vermilion red of Eva Unit-02. There’s also a detailed version of Asuka herself engraved into the blade. This blade is considered one of the main attractions of the exhibition and the engraving is by Mr. Shigetsune Katayama, a blade engraver. The technique used to achieve this was the ranma-sukashi (transom openwork) technique.

Rei’s blade, titled “EVA PROTOTYPE 00 Wakizashi (Dragon and Lance)”, utilises Unit-00’s trademark colours to great effect and is another of the exhibition’s main attractions. The engraving on this one is simply beautiful and depicts a Kurikara Dragon (which represents Acala in Buddhism) entwined around the Lance of Longinus. Engraved by Mr. Soufu Kinoshita, a sword ornament craftsman. This work incorporates many motifs from the Evangelion series: The grip and scabbard are in Evangelion Unit-00’s characteristic colours. The pommel is inlaid with agate, which represents “the green part in the parietal region of Evangelion Unit-00”. The sword guard is made from pure copper and is engraved with the hexagonal warning symbols which appear on the Nerv HQ monitors when Angels attack. 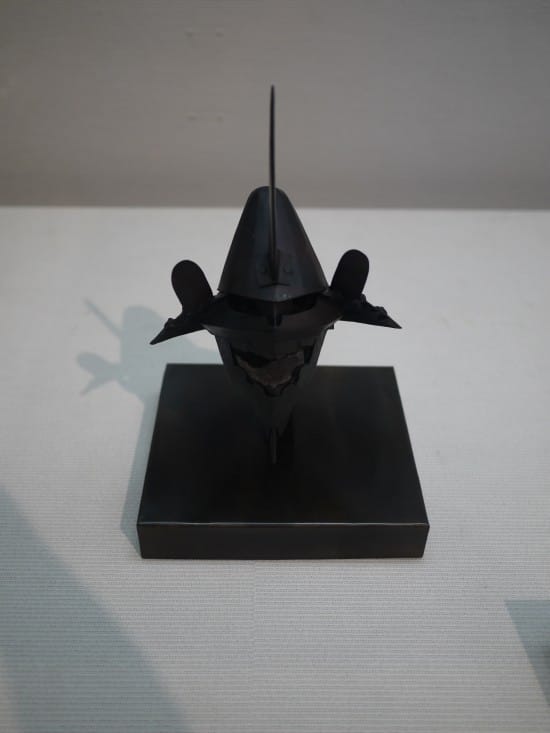 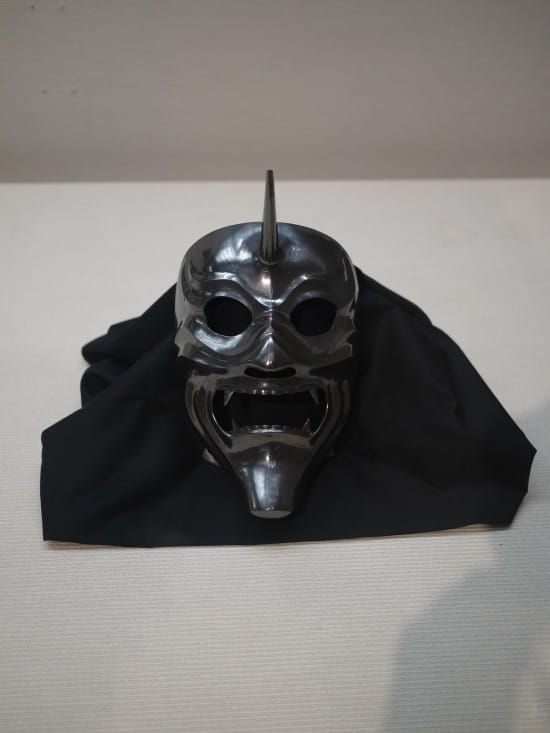 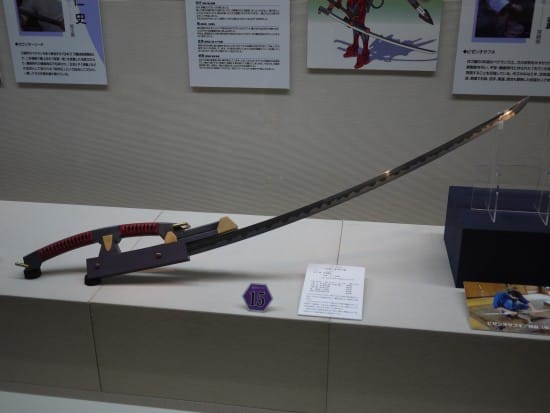 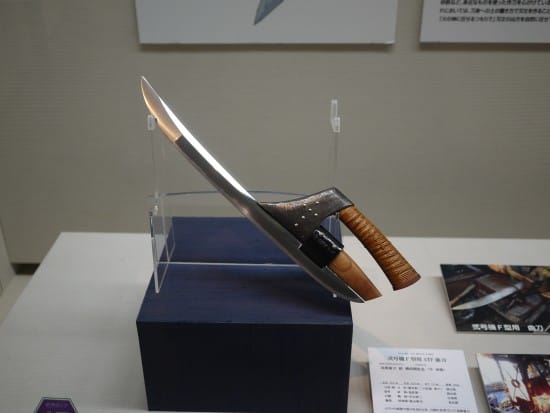 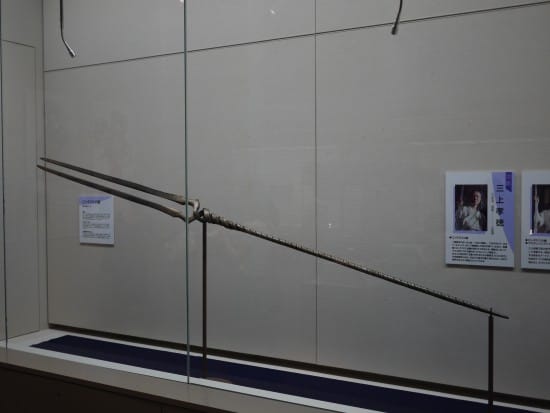 The main attraction in the exhibition, the Lance of Longinus. The forked lance measures over 3 metres in length and weighs over 22 kg. The lance was produced by Mr. Sadanao Mikami, a swordsmith, and Mr. Shoichi Hashimoto, one of Mr. Mikami’s apprentices. Although much smaller than the lance appears in the anime they still had to extend their workshop in order to accommodate it. The lance is made from Damascus steel, which was produced “using techniques to create layers of tamahagane (steel produced from iron sand) and nickel alloys, and to highlight the texture, which is one of the characteristics of Japanese swords”. 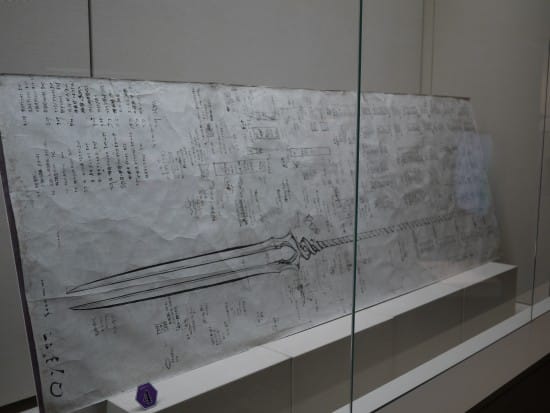 The designs for the replica Lance of Longinus. 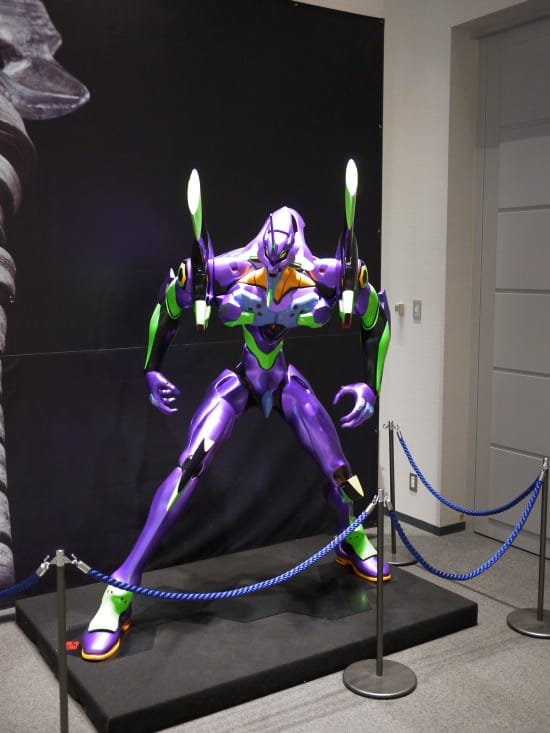 Eva Unit-01 stands guard over the section where you’re not allowed to take photographs. It was a wall full of stills, artwork, production notes and similar from the three Rebuild of Evangelion movies - the sort of thing that would make UK Anime’s editor squee so hard only dogs could hear him (I wondered why there was barking outside of the office window - Ed). But, alas, I had to put the camera away for that part. Sorry! 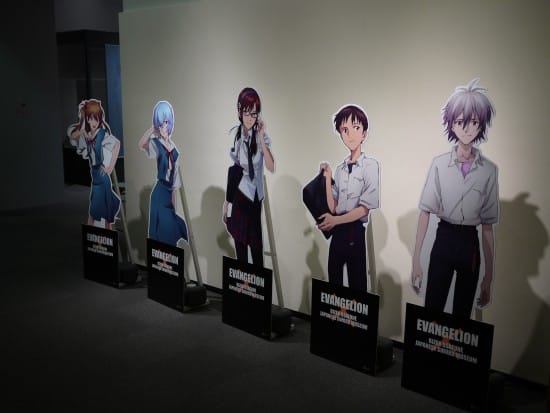 The Eva pilots mark the way to the Evangelion Store.

The Evangelion Store was situated at the end of the exhibition and was also a camera no-go zone. They were selling every type of Evangelion merchandise you could imagine: CD’s, DVD’s, t-shirts, bags, books, phone chargers and canteen trays. Yes, they even had NERV canteen trays. Of course they were also selling beautiful Japanese swords, though you might need to re-mortgage the house to be able to afford one.

For those wishing to stock up on Evangelion merchandise or just peruse the goods, there are permanent Evangelion stores in Tokyo and Hakone.

My Naruto Shippuden Box Set 14 review is up and you can read it here.